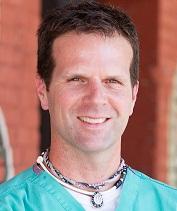 In medical practice for 20 years, Dr Doug Lewis has been in private practice as a family physician, a hospitalist, a full time faculty member, and a Cystic Fibrosis (CF) specialist.

He is a physician in his day job, which he works around his priorities as a husband, father, and triathlete.

Doug began competing in triathlons in 2005 and as he worked up to the Ironman distance, discovered that he had issues with fluid and sodium balance. This led to carrying out research projects involving endurance athletes and more specifically work in Cystic Fibrosis, which in turn led to a relationship with Andy Blow and Precision Fuel & Hydration.

He is now the director of a CF clinic in Kansas, and continues to compete in triathlon with 12 full distance Ironmans under his belt. As an Ironman Legacy Athlete, he will be competing in the Kona Ironman World Championships in 2025.

University of Kansas School of Medicine

University of Kansas at Wichita, Residency