5 things to consider when training for something new

Okay, so I’m not entirely new to Swimrun, but I don’t think you can really count my two outings at the ÖTILLÖ Swimrun Isles of Scilly Sprint race.

Training for an unfamiliar discipline is certainly a different beast to training for an event for which you are already quite specifically fit, so I’ve pulled together some reflections on what I’ve been doing to prepare for longer swimrun events in case it’s helpful for when you’re considering a new challenge...

It’s helpful to zoom out and look at the big picture whilst preparing for a specific race.

How many weeks of training do I have available? Where am I now and where do I want to be? What life commitments do have in that time window?

These are all questions I asked in order to build a framework for my training but, for me, I don’t think it’s optimal to plan every session on each particular day when you’re unfamiliar with the disciplines you’re tackling.

I set out a vague training plan for the 10-week run up to the race this weekend, but it was nothing like the training schedules I usually had mapped out when I was training ‘full-time’ as a canoeist, where my fitness was very specific.

Back then I’d discuss a four-week block with my coach (I’d be training twice or sometimes three times a day, six days per week) and we’d pretty much nail it down as I knew what volume I could deal with and largely how my body would react.

As I was starting this 10-week block relatively out of shape and was training for an unfamiliar discipline, I was conscious I’d have to be far more flexible with my plan.

I also had to bear in mind that everything had to fit around the evolving challenges of running a business and life at home, so I set myself some simple targets early on…

1. A ‘long’ run each weekend (where possible), building in length towards the race. I’d never run more than about 10 miles before in my life and I wanted to build up to banking some runs close to the full race distance if possible.

2. Tick off one focal ‘Red Mist’ swim set each week with Andy and James (thanks Swim Smooth!). I got involved with some Red Mist sessions when Andy was preparing to race the ÖTILLÖ Worlds with Paul, you need to get your head screwed on before smashing out one of those sets…

3. Outside of these key sessions, I’d try to add a supplementary swim session or two and a couple of runs each week. Knowing it would be tough to lock down a lot of additional swimming, I put more emphasis on running (my weaker of the two disciplines anyway)

4. Above all, I needed to listen to my body throughout and tweak the plan to avoid injury. It became obvious very quickly once I got started (particularly with my running) that I needed to start steady and gradually increase load.

It’s very easy for life to get in the way of getting things done and it was important for me to figure out how I was going to shoe-horn my training into my already busy schedule.

The fact that I’m running a small business and that my girlfriend Anna works incredibly hard (often at unsociable hours) as a Paediatric Nurse, sometimes means that our time together is limited, so it was important to me that training didn’t impact our time where possible.

I planned most of my swimming sessions early with the group at David Lloyd Ringwood as, although nobody enjoys a 5:15am alarm, it meant I could tick a solid swim off before 7am and not interrupt time at home in the evenings too much.

Kudos to Andy, James and all the guys down at DL for making swimming so much easier for me – it’s always easier to get out of bed when you’re meeting other people!

Fortunately, Anna was keen to come out and ride her bike with me on my longer runs at the weekend, which meant we could get out and explore the New Forest together whilst nailing a solid session. Win, win.

I also had to factor in nearly two weeks of traveling in the US just a few weeks out from the race, so planning to stay in hotels close to decent pools or running trails was the key to making sure I at least ticked over whilst I was on the road (which I know Andy had to do too on his own US road trips).

When I jump back in a kayak, it’s like I never left. Okay, these days I feel pretty sluggish in a boat, but I can still ‘wing it’ and get by pretty well without too many hours of training. The fifteen years or so of paddling I have under my belt won’t disappear overnight.

Although I used to run and swim as supplementary training when I was paddling, I definitely don’t have the same volume of experience in the tank to draw upon in the swimrun disciplines. So, when you’re planning just 10 weeks of fairly limited training ahead of a race, there’s nothing better than being as specific as you can with your training.

To train for the swimming elements of a swimrun, this meant doing most of my training with hand paddles and a pull buoy. In fact, once I worked up to being able to work hard with all my kit on (see injury prevention below) I almost exclusively swam with all of the ‘gubbins’ I would be racing with, trainers ‘n’ all!

Most of our sessions were geared towards pushing aerobic threshold and had a heavy pacing focus, both of which will be key come the weekend.

Except when traveling or when injury left no option, very little of my running was on roads, as the run sections at all of the ÖTILLÖ Swimrun races are known to include some pretty gnarly trails.

Luckily, I’m spoilt at home in Hampshire/Dorset, with the New Forest and coastal paths literally on my doorstep. I ran the Maverick Dorset Original 16km around four weeks into my run training and that was a great test (I’d thoroughly recommend that one if you are in the UK!).

I also did very few ‘fast runs’ as I found I struggled with my shins when pushing on hard. Instead, I focussed on sessions close to what will be my ‘race pace’ for longer durations of time.

When short of time, I’m also a big fan of building volume with shorter sessions closer together, so I did a bit of that. For me, because I was trying to build from running nothing more than the local parkrun, to close to 30km of technical trail in just 10 weeks, this was key.

Yes, this is an obvious one I know, but one to really be mindful of when taking on a slightly left-field event to your norm, as the risk of picking up an injury will be increased.

For me, the biggest risk was when running. Although I’ve been ticking over with bits and pieces of training over the past year or so, I haven’t done any significant running and I’m not built like your typical endurance runner to say the least!

When I started running at the start of this training block, I really suffered with sore shins and exceptionally tight calves, to the point where I initially struggled to jog around 5k pain-free. I realised very quickly I needed to step back my expectations for ramping my running volume up quickly and stuck to a ‘little and often’ strategy.

For the first few weeks, I literally ran two or three miles at a time, but on most days I would start to build the load. Early on I also found that running on the treadmill straight out of the pool after a swim set was a good idea as my calves were well warmed up after being in the water.

I took to the swimming a bit more naturally (though I definitely swim like a bit of a chopper!), so the strategy I took there was to gradually ramp up the distance, intensity and resistance (swimming in my trainers, etc).

For the first few weeks I just got in and swam with the 6am group at DL Ringwood, purely to take part and then, as I felt more and more comfortable, I added paddles to some of the sets and started to push the pace on a bit.

Get some training in with your race partner! (Swimrun specific)

Okay, so this is something specific to swimrun and something I would have liked to have done better.

I found my race partner, Danni Shrosbree, in a rather unconventional way. We ran a campaign back in March to find me someone to race with from the Precision Fuel & Hydration community.

I was stoked to team up with Danni as she’s a really solid athlete. She rowed at Oxford Brookes University in the eights, winning the European University Championships before injury prevented further progression.

A couple of years ago she switched to cycling, joining CCL, where she’s been performing well at national series races. She also has an ÖTILLÖ Swimrun under her belt, having raced Utö back in May.

Unfortunately, Danni and I only managed to get together for one swim set in the pool and slotted all of half an hour of steady swimrun tethered together before the Salty Sea Dog Long Swim with a week to go before the race!

I’d have liked to get more work done together, but we’re both pretty easy going and not shy of a hard day out, so here’s hoping we can pull it together on the day. Wish us luck… 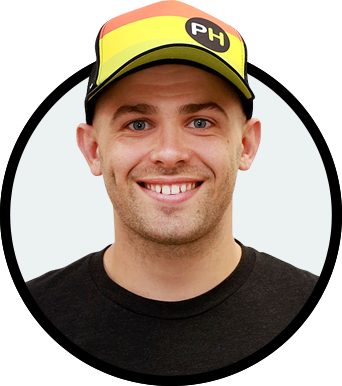 Jonny has a Master's Degree in Mechanical Engineering from the University of Surrey and he's represented Great Britain at several major canoeing events, winning two silver medals at the World Championships.

Jonny has been a key member of Precision Fuel & Hydration since 2011 and he's a keen swimrunner and rugby fan.