After winning the Amateur IRONMAN 70.3 World Championships and the Oceanman World 5km during a 17-year career as an age-group and professional triathlete, I retired from racing in 2018 and launched my coaching and events business – Long Run Collective - with my sister Susie.

I retired from professional racing as I was craving a calmer lifestyle – less travel, less structure and to have the chance to say 'yes' to more unique challenges without it impacting my race season. Little did I know I was about to face an entirely new challenge!

My active, happy care-free world was turned upside down as I was diagnosed with advanced melanoma skin cancer in February 2020.

Being active and being outside has been part of my life since I can remember. I am fair skinned with blonde hair and I tried to wear sunscreen and a hat, otherwise I burnt and got heat stroke very easily.

I've been very fortunate to spend time working, training and racing around the world; and I thought I did pretty well at covering my skin in sunscreen but hindsight is a wonderful thing.

One of the highlights of training in America and Australia was the outdoor 50m pools. I will be very honest – I don’t remember lathering up in sunscreen before every swim session. Instead, I smiled smugly as I swam in the open water basking in the glorious rays! Perhaps this was where the damage started.

In 2019, I noticed a small lump appear on the back of my arm. It wasn't until the summer, when I was wearing more vests, that my family started to comment on the lump which had now become red.

I went to see my GP who initially dismissed my red lump as a hormonal skin tag. It wasn't until my mum told me to go back and demand photos be taken and sent to dermatology. That's when things changed.

Within two days I received a call from a dermatologist informing me that he didn't like the look of this lump but he wasn't sure what it was so it needed to be removed for a biopsy. Two weeks later I was in Durham Hospital having it removed. At this stage no one had mentioned the 'C word'.

This was now December 2019 and I was very relaxed – I had been told by a surgeon not to worry. I was expecting the biopsy results within 8 weeks but it was not until February 2020 that I received a letter asking me to come back in.

I entered the hospital so relaxed... I left numb. I was told the biopsy results were advanced melanoma skin cancer and it had progressed to Stage 2C. I was gobsmacked.

For reference, skin cancer is the out-of-control growth of abnormal cells in the epidermis, the outermost skin layer, caused by unrepaired DNA damage that triggers mutations. These mutations lead the skin cells to multiply rapidly and form malignant tumours.

The effects of skin cancer on me

Initially, I felt pretty relaxed about it all, but the reality soon kicked in. The more questions I asked the specialists, the worse I felt. The fact I had been diagnosed with an advanced cancer was terrifying.

As soon as I received the diagnosis, I was given a clear treatment plan and within two weeks I was back in hospital having an operation to remove a larger area of skin around the back of my arm.

The week after I came out of hospital the country was put into lockdown due to the COVID outbreak. Subsequently, all my post-op care was halted and I was house bound. I had been told I could call my designated skin cancer nurse at any time with concerns and I would be seen every 3 months by the skin cancer team (for the next five years!) to monitor my body post-surgery and to monitor the development of any other lumps.

Due to the pandemic, I didn't see or hear from anyone from the hospital until six months later. All I could think about during this time was the fact I had been told there was a 60% chance that the cancer had spread or could spread throughout my body.

Once the surgery wounds healed, physically I felt surprisingly very good. Perhaps it was due to the unique global environment and the peaceful way of life the lockdown brought, I was able to run to escape all my thoughts and worries.

However, 8 months after surgery, I started to notice a lump develop in my left arm pit. This quickly developed into swelling in my left arm pit and my left breast. My breast went from an A cup to a D cup and it was very painful. When I saw my GP in November 2020, he referred me to the breast cancer clinic but once again, we were going through the pandemic and hospitals were having a very challenging time.

As a result, it took until the New Year 2021 for me to be seen by the breast cancer clinic. I'd convinced myself that I had breast cancer and was very ill with anxiety. I lost a lot of weight and became very weak with anaemia.

In January 2021, I was seen by the clinic, who carried out some tests but said I was too young to have a mammogram. They could see the huge swelling and pain I was in but said they didn't know what was causing it so told me to contact the skin cancer clinic. Not content with this answer, we went private for further tests but that also came back clear of breast cancer. Despite numerous calls to my GP, no medical professional knew what was going on.

By March 2021, I'd spent most of the time in bed with severe chest pain. The UK was going through a third wave of COVID so I was unable to see my family, but thankfully they were supporting me from afar - it wasn't until my brother tracked down a private lymphedema specialist that could visit me at home did we start to get some answers.

For reasons unknown, I'd developed an infection within my lymphatic system, potentially as a result of the surgery, which had basically blocked up my entire system causing the extreme swelling, leaking breast and pain.

By April 2021, I was finally able to have a face-to-face appointment with my skin cancer team and they referred me for further tests to rule out a further spread. I had a CT scan which was when they detected two nodes within my chest that they weren't sure about. They're not large enough to cause immediate concern but I'm now having CT scans to monitor their growth.

The effects of cancer on athletes

Every cancer patient's experience is different, but I have found that as soon as I push my body - be it swimming, running or in the gym - I get a flare up with the lymphatic system causing pain and swelling throughout the arm and chest. In September 2021, we took part in the Coniston Chill Swim – an event that I love and had previously won.

This was the first event I'd done since my illness and it felt great to be back racing with fellow Long Run Collective athletes. However, I suffered with a swollen and lumpy hand, arm and breast for weeks after the event. This is not life threatening but it's something that I've come to accept I'll have to live with.

Cancer patients manage lymphedema with compression – I wear compression bras a lot of the time now. Holistic treatments such as gentle massage, acupuncture and exercises are also helpful ways to calm and encourage the flow of fluid around the lymphatic system.

Before my own diagnosis, I was aware that 2012 IRONMAN and IM 70.3 World Champion Leanda Cave had also been diagnosed with skin cancer. She shared this advice with me:

Athletes start young, and like all young people, athlete or not, they think age and illness will never catch up with them.  But it does.

I wear arm protectors when I cycle, and I tend to set my alarm super early to avoid the peak hours of sun exposure.

Ultimately, it’s simple - wear sunscreen.  Get into a routine of applying it any time you are about to head outdoors for a workout, even on cloudy or rainy days. If you can, wear protective clothing in extreme sunny conditions. Always have sunscreen in your workout bag.

And finally, wear a hat as often as you can, even if you're just taking the dog out for a walk!

For me, the fear of skin cancer returning or something else developing within my body is very real. I've been struggling with anxiety and having therapy to manage my concerns. The mental angst that comes with cancer and not having enough support at the time is probably to blame here.

I've heard similar stories from people who have been through this during the pandemic. Part of me wants to move on with my life but as the pandemic has calmed, the hospital departments have opened back up again and therefore my quarterly skin monitoring has commenced. It's hard to escape the C world.

If you have any skin cancer questions or concerns, I would encourage you to visit your GP and Melanoma UK who have an incredible app to check your own skin, as well as dermatologists on hand to answer your questions. 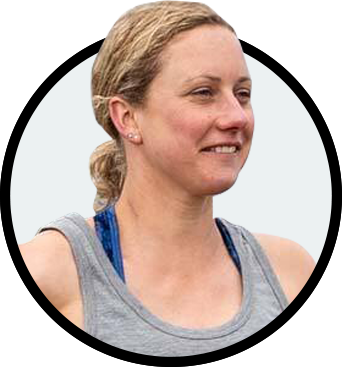 After racing on the Age Group and world triathlon circuit for 17 years, Georgie retired from racing racing in 2018 and launched a coaching & events business – Long Run Collective - with her sister Susie.

Career highlights include winning the Amateur World Ironman 70.3 Championships in Florida as fastest female overall, competing in the 2018 Otillo World SwimRun Championships and being crowned the Oceanman World 5km Champion in 2017.