Sub7 / Sub8 Project: What will it take to become the fastest ever long-distance triathlete?

Sport has consistently challenged the perceptions of what the human body is capable of. A prime example of this is the famed run of Roger Bannister in May 1954 when he became the first to go under the 4-minute mark for the mile. Once the barrier had been breached for a feat that experts had previously considered impossible, the floodgates opened and it took just 46 days for the record to be broken again.

More recently, the INEOS 1:59 challenge pushed the boundaries of what had seemed possible by tailoring conditions and a course (and 42 pacemakers!) for Eliud Kipchoge to break the 2-hour barrier for the marathon.

Triathlon is following suit with a challenge of its own. Enter the Sub7 and Sub8 Project…

It's a full ‘iron-distance’ triathlon, so a 3.8km swim, 180km bike and 42.2km run. The men are aiming to complete the distance in under 7 hours, so they’d need to knock ~28 minutes off the current official world record time of 7:27:53 set by Jan Frodeno at the Tri Battle last year.

Alistair Brownlee, the double Olympic champion and two-time IRONMAN winner, was due to take part by an injury meant that he's been replaced at the 11th hour by Joe Skipper, who will face off against Kristian Blummenfelt, the reigning Olympic champion who rocked up with an IRONMAN debut winning time of 7:21:12 in Mexico in November (the favourable currents during the swim in Cozumel meant that his time wasn’t recognised as the world record).

The women are attempting to break 8 hours, shaving just over 18 minutes off the 8:18:13 record set by Chrissie Wellington at Challenge Roth in 2011.

It’s Nicola Spirig, Olympic champion and six-time European champion, taking on the Sub8 and Lucy Charles-Barclay was originally pencilled in to join her. However, Charles-Barclay suffered an injury in the build-up and has been replaced by Kat Matthews, the IRONMAN UK Champion and 4th place finisher at the 70.3 World Champs in 2021.

In the last few years, we’ve seen triathlon experiment with various formats of racing through Super League Triathlon, the Collins Cup and the Tri-Battle head-to-head.

Sub7 / Sub8 is the next evolution. Let's take a look at the format…

The Sub7 / Sub8 organisers, Pho3nix, have selected the Lausitzring Circuit in Germany and we can assume that a leaf was taken from the INEOS 1:59 marathon playbook. They’ve carefully considered a location where the climate, water temperature, conditions, and course profile are conducive to the fastest times possible. Alistair Brownlee referenced the sub-2 marathon attempts and their relentless efforts to ‘control the controllables’, allowing the athletes to truly explore the extent of their capabilities.

With this in mind, the swim course is a point-to-point swim across Lake Senftenberg. This minimises the need for the athletes to slow down in order to turn around marker buoys, allowing them to maintain their speed and make the most of their pacers and the drafting effect.

The crucial bike leg takes place on a fast, flat surface from the swim exit to the Lausitzring. From this point, the athletes will make use of the 5.8km High-Speed Test Oval, which is where the world’s leading car manufacturers put their motors through their paces, so it’s designed with speed in mind. The lapped nature of the circuit and the closed roads will give pacers opportunities to roll in and out of the race.

The run will utilise the Lausitzring Circuit, meaning that there will be no slow or dead-turns to navigate. It will also mean that there’s minimal elevation change (48m) throughout the 42km course.

The most significant difference between this challenge and a standard IRONMAN race is that the four athletes will use pacemakers. Each participant can select ten pacers and split them across the three disciplines as they see fit.

More importantly, they’ll be able to draft off these pace-makers. With all other factors stripped away, the ability to draft on the bike (the longest discipline in both distance and time) should allow the athletes to maintain a higher average pace than we saw in the previous best iron-distance time.

When quizzed recently, triathlon great Mark Allen suggested that drafting will allow the athletes to ride at a ‘minimum of 2mph faster on average’. Jan Frodeno was already averaging 28.7mph (46kph) when setting the WR at the Tri-Battle, so the possible paces being held with drafting legalised could be eye-wateringly fast to us mere mortals.

The marathon leg of these attempts will also see the benefit of the use of pacers and drafting. Typically, once these athletes hit the run course of their full-distance events, the field is so strung out that they’re often running alone. Even when they’re running against competitors, they would be reluctant to offer their rivals a helping hand in the form of a break from the air resistance.

Having dedicated pacers will allow the athletes to ensure that they’re hitting their splits and, more importantly, it will help them conserve energy by limiting their drag.

One of the most successful and in-depth approaches to pacing strategy and formation came at the successful INEOS 1:59 marathon. With their dedicated team of data scientists and aerodynamic research specialists, they ran through hundreds of models in both the wind tunnel and on computational fluid dynamics (CFD) software. Eventually they settled on the radical ‘Inverse-V’ formation, something that hadn’t been seen before, but no doubt had a massive impact on Eliud’s run.

Will the Sub7 / Sub8 athletes adopt a similar strategy?

This is the real crux of the challenge isn’t it? Racing against the clock will mean that Skipper, Blummenfelt, Spirig and Matthews will be aiming to stay ahead of target splits throughout…

To put that into perspective, the current IRONMAN World Championships swim record is an average pace of 1:12/100m, and the Olympic 1500m record pace is 0:58/100m. Whilst Kristian has shown himself to be a stronger swimmer than most of the field, he wouldn’t be classified in the ‘uber swimmer’ category, so it will take a big leap for him to hit the target.

Lucy Charles-Barclay currently holds the female IRONMAN World Championships swim record of 48:14m (1:14/100m) and would've been on pace to head out of the swim within the target time. It'll fascinating to see how close Spirig and Matthews can get to that 45 minute target.

As I alluded to earlier, the current iron-distance bike record is held by Jan Frodeno, he hit a 46kph (28.7mph) average across the 180km bike leg.

In order for the men to reach their 3:45 hour target, they’ll need to be riding at 48kph (almost 30mph). Both of the male participants are accustomed to putting the hammer down on the bike and really pushing the pace.

Again, the use of pacers and the legalisation of drafting for this section should prove invaluable for the athletes to maintain their pace across 180km.

How much will they have left in the tank for the run leg? The men will be aiming for a 2:30 marathon in order to break the 7 hours. This is an average pace of 3:33min/km, 8 seconds per kilometre faster than Denis Chevrot who holds the current fastest marathon time for the men across the iron-distance. This is still a long way off the 2:52min/km that Kipchoge averaged for his official marathon world record (2:01:39).

The women are aiming for a 2:50 hour marathon in order to get under the 8-hour mark. This will mean they need to run at 4:02min/km for their 42.2km run. This is where Kat Matthews may come into her own, having run a 2:48 marathon at IRONMAN Tulsa last year.

The format and course set up suggests that the athletes and organisers are taking lessons learned from the sub-2 marathon attempts. However, the simple fact of the matter is an iron-distance triathlon is considerably longer, therefore ‘controlling the controllables’ across three disciplines creates more challenges.

It’s worth mentioning that if the mythical 7 and 8 hour barriers are broken, the times won’t count as official records because of the use of pacers and legal drafting. But success will certainly challenge our perceptions of what human bodies, and these seemingly super human athletes, are capable of. 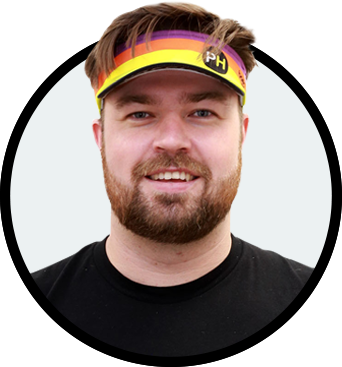 Alongside his role as Customer Service Specialist at Precision Fuel & Hydration, Greg has completed a BSc in Sports Coaching Science and is currently undertaking an MA in Leadership in Sport at the Institute of Sports Humanities in London.